Find Dog Bite Injury Lawyers Near You & Get Free Legal Advice. Find Out if You Have a Valid Case with No Cost or Obligation.

Browse our gallery of legal topics >>

Browse through our complete library of related legal articles and find out how much your case is worth. >> 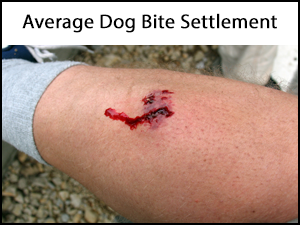 Unfortunately, dog attacks are on the rise as more than 4 million people are bitten each year in the United States. Dog bite victims have a number of avenues available to recoup the expenses and losses incurred after a dog attack. Assuming there is no question surrounding the responsible dog and owner, the victim need only prove one or more of the following four things to receive damages:

If the dog has a history of biting or attacking others, the victim may also be eligible to receive double or triple the compensatory damages. Additionally, punitive damages may be awarded as a punishment against the dog's owner.

What are Compensatory Damages in a Dog Bite Case?

The most common damages claimed and awarded in a dog bite suit are medical bills. These may include doctor bills, medications, hospital admittance, plastic surgery, physical therapy, and possibly psychiatric care to treat issues such as posttraumatic stress disorder (especially in children). You can also claim lost income for work time lost during recovery and medical treatment, as well as lost future earnings if applicable.

Pain and suffering is more difficult to quantify; amounts vary tremendously depending on the type of bite, severity and nature of the wounds, and even which part of the country the attack occurred, as local laws vary greatly. Another possible claim is loss of services, which isn't necessarily economic-based. Husbands and wives can include loss of services; even parents can claim loss of companionship if their child is bit.

What are Punitive Damages in a Dog Bite Case?

Meant as a form of punishment, punitive damages are typically awarded for either repeat offenders (dogs who have attacked in the past) or for negligent behavior such as allowing a dog that is known to be dangerous to run loose. The deeper the pockets of the defendant, the greater the potential punitive award.

Dog bite cases vary widely, though the average settlement amount is $44,000. Following are some cases to give you a better idea of how drastically these amounts can vary.

Watch this video to find out if you are entitled to compensation for your dog bite injury.

Should You Ever Settle in a Dog Bite Case?

If your injuries are relatively minor and your compensatory damages are low, pursuing a lawsuit is likely not in your best interest. Attorney fees add up to approximately 33 percent of your judgment, you must pay for expert witnesses to testify, and the case may take years to go to trial. What's more, if you win your suit, the case is nearly always appealed, which means a retrial. You may want to call an attorney, however, if your potential suit includes a large amount of medical bills, pain and suffering, or any other number of factors that complicate your case (such as an insurance company insisting on low-balling you).

If you decide to move forward with a lawsuit, contact a personal injury lawyer for a free consultation. He or she can advise you on the merits of your case and how to proceed.